I’m that fan who gets visibly upset when her team isn’t doing well. I’m that fan who will still dress in game-day colors even when she has to be at work instead of going to watch the game. I’m the fan who can’t relax until the game clock hits 0:00. Even when my team is already up by three touchdowns and it’s the fourth quarter.

I’m also the fan who just has to have a Georgia-themed Christmas tree: 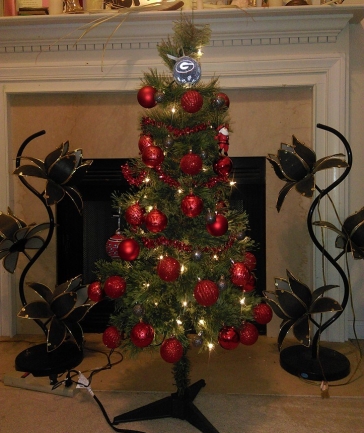 It can be difficult at times to be a Georgia Bulldogs fan. Previous seasons have been filled with heartbreaking losses, missed opportunities and dashed hopes for championship wins.

Which is why I didn’t see this year’s comeback season coming. Which is why when people would ask me if I was happy with how the dawgs were playing and if I thought they’d make it to the playoff, I’d always be careful to mention that I was only “cautiously optimistic.”

While I was prepared for another “decent” season at best, I was not prepared for the almost miraculous underdog story of this year’s 12-1 season. A magical story that not only includes a conference championship, but also a shot at the national title AND a victory over the one team that beat us during the regular season, Auburn.

And in a year that has been tough to bear for many of us, myself included, the Bulldogs’ underdog story has been a welcome bright spot. A wonderful reminder for this college football fan that things can turn around for the spectacularly better, even when you least expect them to. Even when the failures of your past make you feel like the victories of your future are forever out of reach.

I don’t know if my dawgs will win the national championship. But I do know, that as a fan, I am happy with how they have played this year and that I was inspired by their underdawg story.

So inspired in fact, I have created a Spotify playlist that I feel captures the underdog spirit of this year’s college football season. It’s called The UnderDawg Playlist.

I’ve made the playlist public, so feel free to listen to it whenever you need a little encouragement or a peppy soundtrack to help turn around a terrible day:

***Just a heads up: I am an unapologetic Top 40 fan. You should know most of these songs, but there may be a few surprises here and there. 🙂